CR-4iA is a small collaborative robot with 4 kg payload and CR-7iA, CR-7iA/L are with 7kg payload. It allows for a collaborative operation with human operators due to no need of safety fences, and enables to locate the robots close together in the manufacturing processes where operators also work, with using the compact size. It supports ceiling and wall mount type, so that it allows to operate in a wider motion range without disturbing operators’ work space. It is easy to relocate the robot by a cart with casters due to its light weight, and it realizes a flexible layout using with iRVision (integrated vision). The small collaborative robot applies various manufacturing processes such as small electrical parts transfer and assembly.

It immediately and safely stops when it comes in contact with a human operator by FANUC’s original safety function as same as CR-35iA. It is certified to meet the requirements of international standard ISO 10218-1 by the third party of safety certification provider. The green color, which is the feature of collaborative robot, makes difference from FANUC’s yellow robot and enables to recognize it as a safety robot at a glance. The inside robot is as same as the yellow robot so that it can keep the high reliability and make the latest intelligent functions, such as iRVision and force sensor, available.

The expansion of “Green robot” lineup, which enables to work with operators collaboratively, is sure to contribute to new automatization of manufacturing industries. 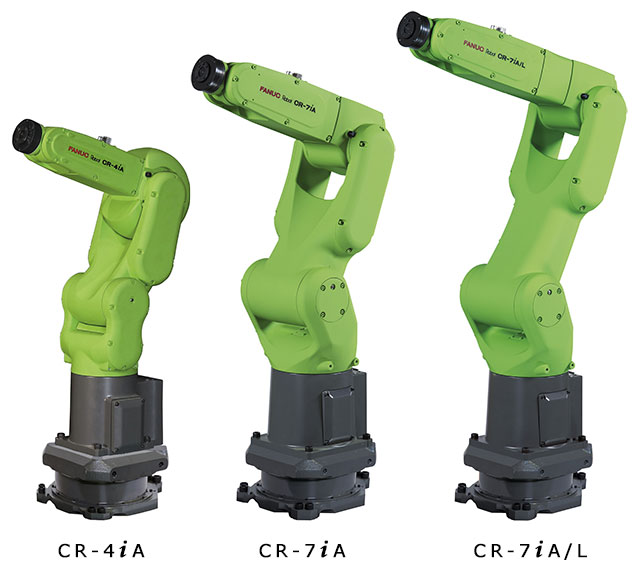